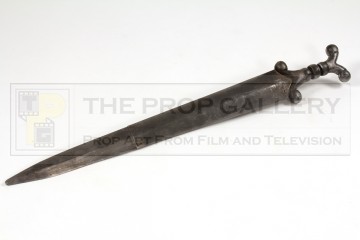 An original weapon used in the production of Gladiator, the 2000 historical epic starring Russell Crowe under the direction of Ridley Scott.

Swords such as this can be seen used by the barbarians in Germania as they do battle with the Roman forces. This is a custom fabricated special effects version of the weapon which features a retractable blade and could be used to safely stab someone on camera, the sword is constructed from metal with a decorative handle of resin and the blade in two parts being spring loaded approximately 9" from the tip allowing it to retract in to the remainder of the blade.

A rare example of a special effects weapon and a highly displayable artefact from this multi Academy Award winning masterpiece and modern day classic.