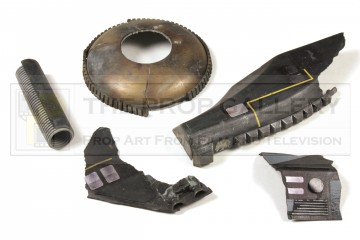 These are original sections of the Simulant Battle Cruiser filming miniature seen on screen in the Series VI episodes Gunmen of the Apocalypse and Rimmerworld. The craft was designed and built by Alan 'Rocky' Marshall of the BBC Visual Effects Department largely from a variety of plastics with various detailing. After filming the beauty shots the craft was exploded by technician Paul McGuinness for the scene where it is destroyed by Starbug in Rimmerworld. These sections were retained by a crew member after the shoot with the lot consisting of seven pieces which are constructed of plastic sheet and EMA plastic tubing with the most significant sections being well detailed with coloured tape and rubber matting, these having been painted and weathered to a high standard.

The miniature sections remain in the condition you would expect with some wear and cracks, the largest measuring approximately 8" in length.