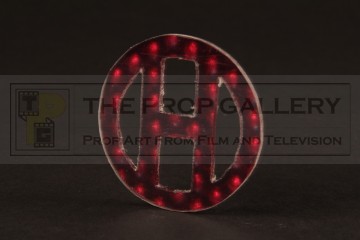 An original prop from the production of the BBC science fiction comedy series Red Dwarf.

H symbols such as this can be seen worn on the foreheads of the various crew members of the SS Enlightenment, including Arnold Rimmer (Chris Barrie), in the Series V episode Holoship indicating their hologram status. The H was created by the BBC Visual Effects Department and is constructed from reflective prismatic plastic, it features a large H symbol set inside a circle with this design being unique to the episode Holoship, to the verso are some pen marks where it was marked for cutting.

The symbol measures approximately 1.75" in diameter and remains in excellent production made condition, very fine.

An instantly recognisable and highly displayable artefact from this cult science fiction series.