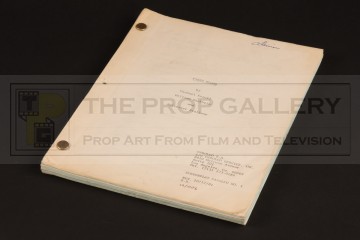 An original script used in the production of First Blood, the 1982 action picture starring Sylvester Stallone as John Rambo.

This original production used script dated 10/12/81 comprises of 118 pages with the front cover bearing the title 'FIRST BLOOD' with writing credit to Micahel Kozoll, William Sackheim and Sylvester Stallone. To the bottom corner the cover features the address for the production company and 'SCRENNPLAY CAROLCO NO.1' indicting that this was the first picture produced by Carolco Pictures, its success would make them a major player in Hollywood going on to produce Terminator 2: Judgment Day and other blockbuster hits. Approximately 50% of the script is made up of blue revision sheets which are dated 10/14/81 and the script is heavily annotated throughout in pencil and pen with instances of scenes being crossed and marked for deleting and hand inscribed notes relating to numerous elements of the production, some in differing hands, including continuity, special and make up effects, costume and other requirements. The front cover of the script is hand inscribed with the name Denise, for Denise Kassar, wife of Mario Kassar who was the co founder of Carolco and the executive producer on this picture, the couple leaving this script as a gift at the hotel where they stayed during filming.

The script remains in generally excellent condition with minor edge and cover wear from handling. This represents an incredibly rare and fine example of an original script and one which clearly saw heavy use during the production of this cult action picture.