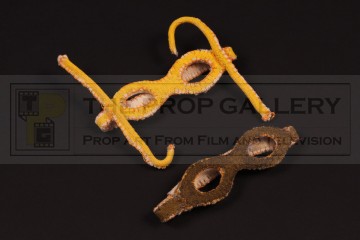 A pair of original puppet goggles used on screen in the hit children's television series Tom and Vicky voiced by Richard Attenborough and Rik Mayall and directed by Martin Pullen.

These goggles are constructed from painted material which has been hand stitched to create the signature Tom and Vicky style. The brown goggles can be seen worn by the frog in the episode Chocks Away as he flies in the plane and similar yellow snorkel like goggles by multiple characters in the episode Treasure Garden, the attachment off a third pair of goggles is also included. Each measure approximately 3.5" and remain in good production used condition.