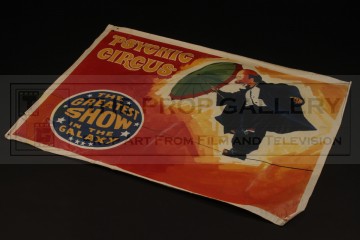 Psychic Circus poster - The Greatest Show in the Galaxy

From the 1988 serial The Greatest Show in the Galaxy starring Sylvester McCoy as The Doctor this is an original Psychic Circus advertisement poster, one of a number of differing designs created by the production. The poster is printed on plastic coated paper and features a colourful illustration of a clown walking a tightrope with 'PSYCHIC CIRCUS' to the top left and The Greatest Show in the Galaxy logo to the bottom, to the verso there is evidence of adhesive from use during the production.

The poster measures approximately 40" x 30" and remains in very good production used and rolled condition exhibiting some creasing and curling with pinning to the corners.

A vibrant and highly displayable artefact from this classic science fiction series.