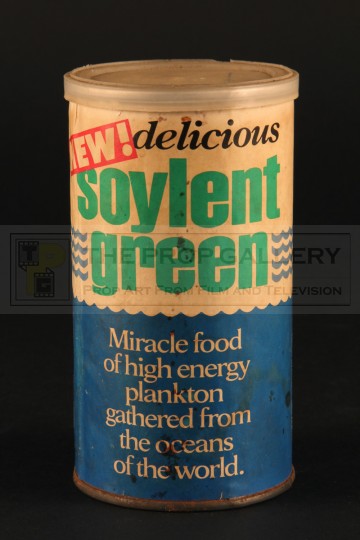 An original promotional prop from the production of Soylent Green, the 1973 science fiction thriller starring Charlton Heston under the direction of Richard Fleischer.

A can of Soylent Green identical to this was used on an advance cinema poster used to promote the release of the movie and is seen held by Charlton Heston who portrays Frank Thorn. The can features a large Soylent Green logo claiming it is "miracle food of high energy plankton gathered from the oceans of the world" with MGM copyright to the side and is actually a vintage can containing a travel kit with the production made label applied, ring pull top partially opened and complete with plastic top.

The can stands approximately 5" high and measures 2.75" in diameter, it remains in very good vintage condition exhibiting some discolouration to the label and tarnishing to the base.

An incredibly rare and highly displayable artefact from the production of this highly regarded cult picture which requires no introduction.