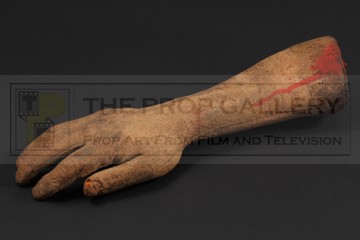 Kiss of the Vampire (The)

An original prop created for the production of The Kiss of the Vampire, the 1963 horror picture produced by Hammer Films.

This arm was created for the production by a special effects team led by noted British pioneer Les Bowie of Bowie Films for the scene where Professor Zimmer (Clifford Evans) places his arm in flames to cleanse a vampire bite. The arm is constructed from rubber and features holes to the fingers where wires were inserted to clench the hand, special effects assistant Ian Scoones stated that this arm was modelled from Bowie's forearm and tested at Bray Studios but ultimately the effect was achieved by filming Bowie's real arm at high speed and then slowing the footage down to create the illusion that it was in the flames for longer that it really was. The blood was added for use in a subsequent unknown production by Ian Scoones who retained the arm following the production before gifting it to a fan in the 1990s.

The arm measures approximately 14" long and remains in very good stable and supple condition with exhibiting hardening and wear only to the fingers.

An extremely rare example of original material from this classic Hammer Films production.