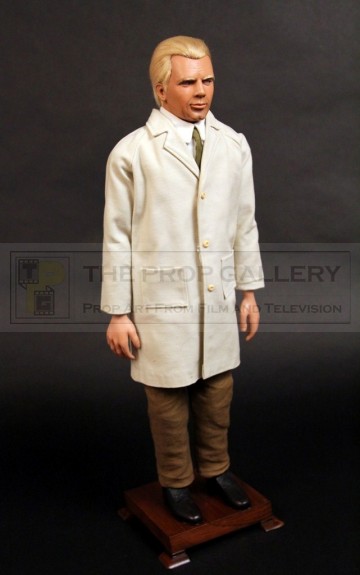 This is an original Professor Ian McClaine puppet used on screen in the production of Joe 90, the 1968 supermarionation television series created by Gerry and Sylvia Anderson of Thunderbirds fame.

Professor McClaine is an electronics engineer and the inventor of the BIG RAT, a device which can record and transfer brain patterns from one person to another which is utilised throughout the series by the professors adopted son Joe, WIN's most special agent.

These supermarionation puppets housed an internal solenoid which enabled mouth movements that could be synchronised with dialogue. Construction of these puppets was a complex and time consuming process, first a master sculpt would be made from clay and then a plaster mold constructed, from which the heads were cast by layering up fiberglass cloth soaked in polyester resin. The puppets were then dressed with mohair and plastic hemispheres for eyes containing a colour photograph of a human pupil. The lower lips are hinged and held shut by a spring allowing movement in order for the puppet to talk. The rear of the heads are detachable to gain access to the internal mechanisms and are held in place by strong magnets, the joints being covered by the hair. The finely crafted internal mechanisms could be used to control the eye movement of the puppet. It was common for several versions of head to be constructed in addition to the normal heads including smilers, frowners and blinkers.

This is the original blinker head sculpted by Terry Curtis and voiced on screen by Rupert Davies, the head is uncommonly complete with its internal mechanism and original eyes, being the blinker head this has eyelids attached to the top of the eyes and when the mechanism rolls the eyes forward it would give the illusion of blinking. The solenoid attached to the head is an original used in production while the back of the head is replica made by sculptor Terry Curtis to exacting standards.

The puppet body on which the head is displayed is a replica, as is the costume with the exception of the trousers which are original and production used. The pattern for the jacket was taken of a studio used original and the costume is constructed from similar materials to an extremely high standard.

The complete puppet stands 21" in height and is truly excellent example which is a testament to the quality of Gerry Anderson productions and a rare insight into the Supermarionation process which is sadly an almost forgotten art form.

Please note that the puppet stand is not included.