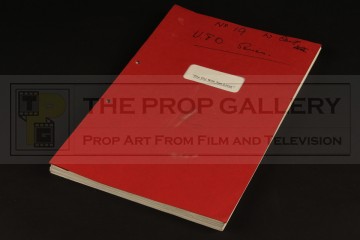 An original script used in the production of UFO, the 1970 science fiction series created by Gerry and Sylvia Anderson.

This original production used script for the episode The Cat with Ten Lives broadcast in September 1970 comprises of 63 pages with a front cover of red card in addition to set and cast lists to the front.The script features several blue amendment pages which are dated 18th May, 1970 and a further two page list detailing there, it was utilised during filming by special effects production manager Ken Holt who worked alongside noted director of special effects Derek Meddings and features extensive hand inscribed annotations throughout to include some minor drawings.

The script remains in excellent production used condition lacking the rear cover and pins having been presumably removed by Holt and further punched for binder use, obtained by The Prop Gallery directly from the estate of Ken Holt.

An extremely rare example of original production material from this classic Anderson series.