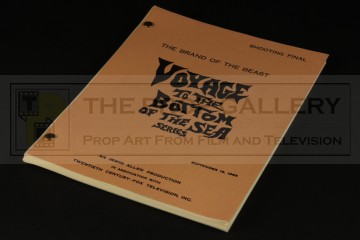 Voyage to the Bottom of the Sea (TV)

Production used script - The Brand of the Beast

An original script used in the production of Voyage to the Bottom of the Sea, the science fiction television series produced by Irwin Allen.

This original production used final shooting script for the Season 3 episode The Brand of the Beast is dated September 19, 1966 and comprises of 70 pages in addition to cast and set lists bound between front and rear covers of brown card with the front featuring the series logo and various production details. The script is printed on light green paper and contains a number of blue, pink and dark green revision pages which are dated September 21, 22 & 23 respectively.

An fine example of original production material from this classic Irwin Allen series.