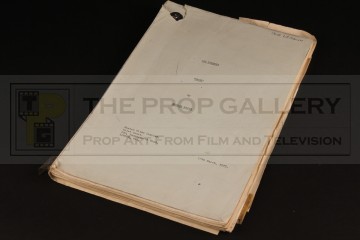 From the Series Two episode Faces broadcast in September 1975 this original production used script is dated Wednesday 12th March 1975 and comprises of 72 pages. The cover of the script features the title 'FACES' with the name of assistant director Derek Whitehurst inscribed to the top corner who used this script during the production, to the interior the script contains numerous annotations in his hand with a quantity of location photographs to the verso of various pages. This is accompanied by further production material to include memos, maps, breakdowns, shooting schedules and a quantity of hand written notes.

The script and accompanying paperwork measure 13" x 8" and remain in very good vintage condition with the cover page detached from binding pin and exhibiting some minor edge wear from handling, overall fine.