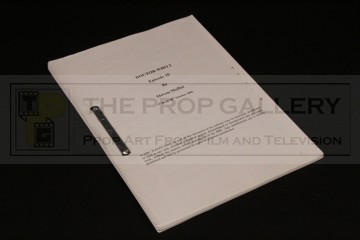 For the series three episode Blink this original production used script comprises of 67 pages in addition to the front cover which bears the details 'DOCTOR WHO 3, Episode 10'. The script is dated to the cover and to the top of ever interior page 30/10/06 and is noted as being a first draft, each page is watermarked with the name of make-up designer Barbara Southcott to whom this script would have been issued during the production.

A fine example of an original script from a highly regarded episode of this long running science fiction series.