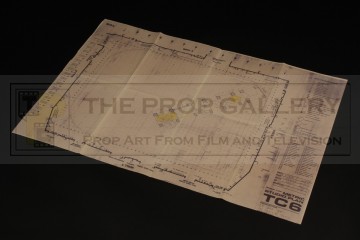 An original floor plan used in the production of the long running BBC television series Doctor Who.

From the 1981 serial The Keeper of Traken starring Tom Baker as The Doctor this is an original production issued floor plan detailing the layout of sets constructed at BBC Television Centre Studio 6 for filming in November 1980. The scale floor plan details a set layout within the studio, this partly hand coloured in yellow, with the production code 5T and the title of the serial to the bottom right corner and credits to director John Black, designer Tony Burrough and assistant Jane Clement who was responsible for producing the original rendering from which this was created. The plan is hand inscribed twice to the verso 'DAY 3, SETUP 2, CAM 2'.