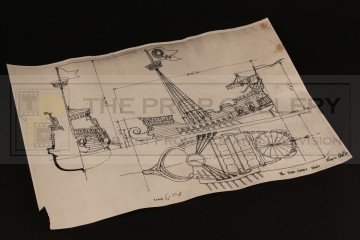 An original concept design used in the production of Willy Wonka & the Chocolate Factory, the 1971 picture starring Gene Wilder under the direction of Mel Stuart.

This is an original production made photostat copy of the original rendering drawn by noted art director Harper Goff as he designed the various elements of the picture, signed by Goff with the date '70' beside the concept features the title 'THE HARD CANDY  BOAT' and is hand inscribed to the top corner with the number 6. The illustration features three elevations of the Wonkatania boat with a significantly differing design to the one ultimately built for the film, director Mel Stuart states in his book Pure Imagination that the Wonkatania was originally conceived as large masted sixteenth century sailboat but they were unable to fit such a large vessel on the stage so it was redesigned.

An incredibly rare example of original production material from this highly regarded classic.