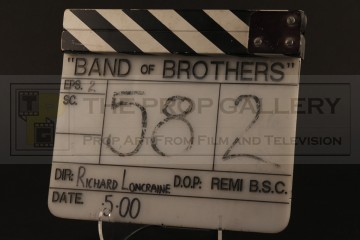 An original clapperboard used in the production of Band of Brothers, the 2001 American war drama series which saw Steven Spielberg and Tom Hanks collaborate as executive producers.

This original production used clapperboard is constructed from semi translucent perspex with an affixed wooden clap stick and bears the series title etched to the top 'BAND OF BROTHERS' in black lettering. This clapperboard was used on Day of Days, the second episode of the series which aired in September 2001, and features the etched name 'REMI B.S.C' which refers to Remi Adefarasin in his capacity as director of photography with the name of episode director Richard Loncraine hand inscribed in pen and the date May 2000 below, the scene and take numbers also remain from its final use during the production.

A displayable artefact and a fine example of the iconic clapperboard from the production of this highly regarded series.