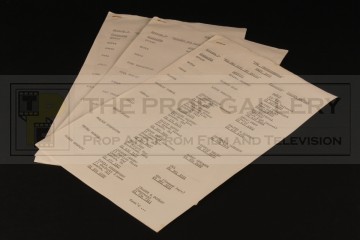 A collection of original paperwork used in the production of The Professionals, the British crime televisions series created by Brian Clemens.

These three cast lists were utilised during the production of the series, for the Series One episodes Old Dog With New Tricks, Everest Was Also Conquered and Close Quarters each of the cast lists are headed with the title of the series and comprise of two staple bound pages featuring a list of characters, artists and contact numbers.

The paperwork measures 13" x 8" and remains in excellent vintage condition exhibiting some minor toning and rusting to the staples, otherwise fine.

A rare example of original material from this classic British series.