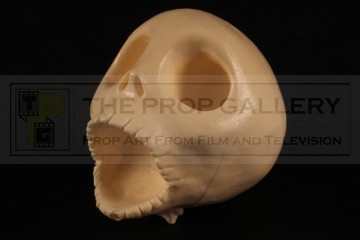 An original puppet head created for the production of The Nightmare Before Christmas, the 1993 stop motion animation favourite directed by Henry Selick and produced by Tim Burton.

This puppet head is one of a number created by the production in order to bring the character of Jack Skellington to life using stop motion animation, in this instance the replacement method where every expression required the use of a different head which each had varying expressions. The puppet head is constructed from high quality resin and features hollows for the eyes with an open mouthed expression, this head was ultimately unfinished and not used on screen, it is extremely likely this is due to a minor imperfection to the lower jaw caused by an air bubble during the casting process.

The puppet head measures approximately 2" in diameter and remains in excellent production made condition, extremely fine. A very rare example of a genuine production made Jack head.