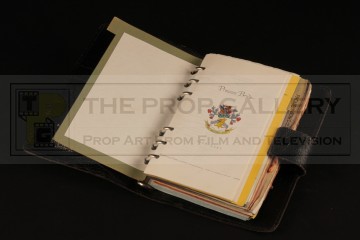 An original bible used in the production of The Princess Bride, the 1987 romantic fantasy adventure picture starring Cary Elwes under the direction of Rob Reiner.

This bible contains a concise collection of various paperwork reductions relevant to the production which is presented in a high quality leather personal organiser manufactured by Gray and Lowe of New Bond Street, London. This bible is believed to have belonged to location manager Paul Shersby as it features a sticker to the interior metal ring with an address which corresponds with the one provided for Paul on the unit list, interestingly the script contained within the bible is a reduction of production runner Kevin De La Noy's with the verso of the front cover being hand inscribed with a note "Paul, with thanks for this one and anticipation for the next" signed with a K. The most obvious conclusion one could draw from this being that the bible was created by De La Noy for Paul Shersby who then added the address sticker. Created for use during the production as a smaller and more usable pocket sized alternative to larger paperwork the bible contains various information which includes the following.

The bible measures approximately 7.5" x 5.5" and remains in excellent production used condition with some edge wear to the pages and file dividers, generally very fine.

An extremely rare and concise example of original production material from this highly regarded classic.