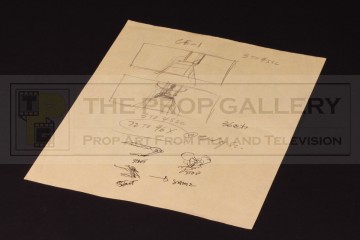 An original storyboard used in the production of Poltergeist, the 1982 supernatural horror produced by Steven Spielberg.

This rough working storyboard was created at Industrial Light & Magic during the production of the movies visual effects work. From the memorable sequence where the ethereal ghost descends the staircase which was achieved by filming actress Paula Paulson dressed in a gown at high speed and composited optically with the live action plate and further effects elements such as animation and articulated mattes. Accomplished in pencil and pen on yellow paper the storyboard features two hand drawn illustrations of the ghost descending the staircase with various notes relating to shot and sequence numbers and further illustrations below of the animation taking place.

A rare example of original hand drawn production material relating to the celebrated special effects for this classic of the horror genre.