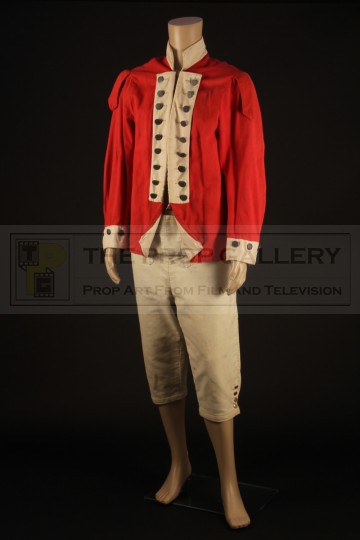 Pirates of the Caribbean: The Curse of the Black Pearl

An original costume used in the production of Pirates of the Caribbean: The Curse of the Black Pearl, the 2003 fantasy swashbuckler directed by Gore Verbinski.

Costumes such as this can be seen worn by guards in various scenes of the movie, notably as Captain Jack Sparrow (Johnny Depp) attempts to escape Port Royal after saving the life of Elizabeth Swann (Keira Knightley) and later in the climactic sequence where Jack escapes with the help of Will Turner (Orlando Bloom). Comprising of a period style red and cream jacket with matching trousers both adorned with decorative buttons and the jacket marked as being size 42.

The costume remains in generally good condition exhibiting signs of heavy production used with some water staining, the jacket lacking the buttons to the epaulettes and a broken button to the trousers which is detached but present.