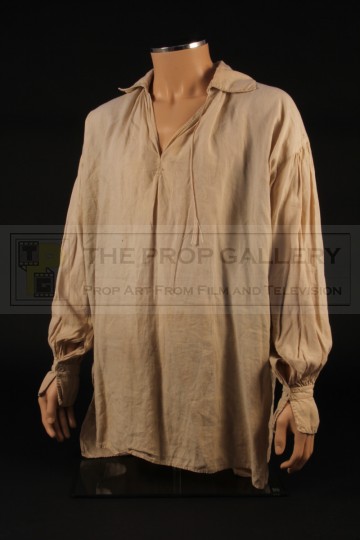 Pirates of the Caribbean: The Curse of the Black Pearl

An original costume used in the production of Pirates of the Caribbean: The Curse of the Black Pearl, the 2003 fantasy swashbuckler directed by Gore Verbinski.

This shirt was custom made for the production for use by Johnny Depp as Captain Jack Sparrow and forms part of his instantly recognisable costume designed by Penny Rose. Constructed from cream linen the oversized pirate style shirt features an open neck with long ruffled sleeves and buttoned cuffs, to the interior collar is a Cosprop label which is hand inscribed stunt in black pen. The shirt has been distressed by the production to include various holes consistent with prolonged wear, further to this are three holes to the rear of the collar which are believed to be for the use of a harness, this is stated on the accompanying Disney COA and a costume tag which is hand inscribed 'JACK STUNT SHIRT, CUT FOR HARNESS'.

The shirt remains in good used and distressed condition lacking one of the draw strings to the collar with wear and light staining and significant evidence of make up to the interior collar and cuff areas consistent with heavy production use. In addition to The Prop Gallery COA the shirt is accmpanied by a Disney COA in original envelope.

An extremely rare and desirable example of principal character costume from this highly regarded box office smash which saw Johnny Depp nominated for the Academy Award for Best Actor.