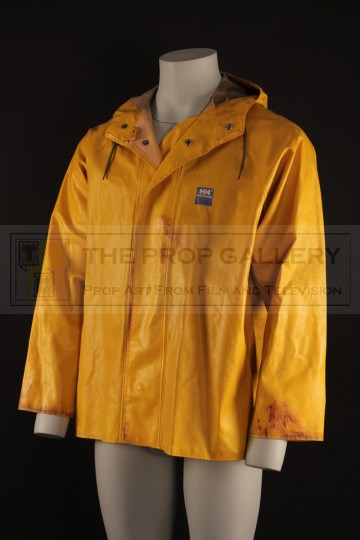 An original costume used in the production of The Perfect Storm, the 2000 disaster picture directed by Wolfgang Petersen.

This Helly Hansen branded rain jacket was obtained by the production for used by Mark Wahlberg as Bobby Shatford. The yellow hooded PVC jacket features the Helly Hansen logo to the chest with press stud fastenings has been paint weathered by the production to appear stained and well used in various areas, notably the chest, cuffs and the interior of the hood, this weathering is consistent with the one worn on screen by Wahlberg in the scenes where he is attacked by the shark. To the interior the back of the jacket has been hand inscribed with the character name 'BOBBY S' in marker pen, this has bled through and is visible from the exterior of the jacket likely due to constant exposure to water during filming, again this can be spotted on screen in multiple scenes.

The jacket remains in generally excellent and weathered condition with a damp odour from prolonged exposure to moisture during the production.