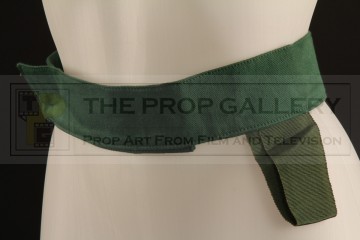 An original belt used in the production of the long running BBC science fiction television series Doctor Who.

From the 1984 serial Resurrection of the Daleks starring Peter Davison as The Doctor this belt was worn by Sneh Gupta as Osborn, constructed from green material the belt features a press stud and velcro fastenings to the interior with an integral holster, it remains in excellent production used condition lacking one piece of velcro, very fine.

An affordable example of screen used wardrobe from this classic science fiction series.