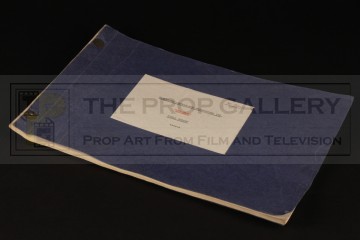 An original document used in the production of The Omen, the 1976 supernatural horror directed by Richard Donner.

This is the original final budget for the production comprising of 33 pages bound between front and rear covers of textured blue card with the front featuring an applied label which is type written 'TWENTIETH-CENTURY-FOX PRODUCTIONS LTD, THE OMEN, FINAL BUDGET' and additionally hand inscribed 'W. FINCH' for production accountant William Finch. The first interior page features the original title of the movie 'BIRTHMARK' with location details and estimated filming dates, authorised by producer Harvey Bernhard it is dated 8th September 1975 and additionally 26th September 1975. The budget is broken down in to various categories with figures for each expense noted, these covering every aspect of the production and totalling $2.6 million, there are various annotations throughout the budget which are hand inscribed in pencil.