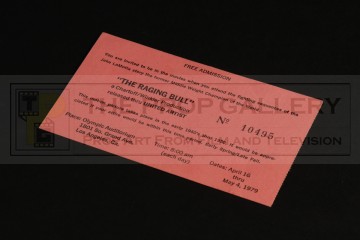 An original ticket from the production of Raging Bull, the 1980 biographical sporting drama starring Robert De Niro as Jake LaMotta under the direction of Martin Scorsese.

This is an original ticket from the production of the movie which entitled holders admittance to the filming of the boxing scenes which took place at the Olympic Auditorium in Los Angeles. The ticket printed on pink card states that the holder is entitled to attend the fighting sequences of the Jake LaMotta story called 'THE RAGING BULL' to be filmed April 16 thru May 4, 1979 and also features the time, location and advice regarding the dress code as the picture is set in the 1940s. To the verso of the ticket is a lengthy release agreement by Chartoff/Winkler Productions with the top signed by Floyd Anderson who portrayed Jimmy Reeves, the boxer who inflicts defeat on LaMotta at the beginning of the movie.

An extremely rare artefact from the production of this highly regarded classic which saw Robert De Niro win the Academy Award for Best Actor.