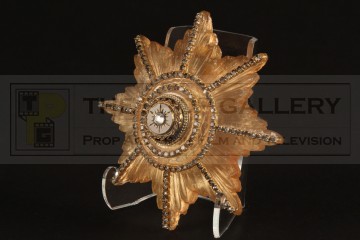 An original prop from the production of Octopussy, the 1983 James Bond picture starring Roger Moore as the suave spy.

This is an original jewel created for the production by prop makers Keir and Louise Lusby for use as the Romanov Star, the priceless Soviet treasure featured in various scenes of the movie. A number of these props were constructed largely due to the requirement of one being destroyed on screen as Borchoi (Gabor Vernon) reveals the fake at repository with the genuine piece later handled by Octopussy (Maud Adams) and James Bond (Roger Moore) who takes it from Mischka (David Meyer) aboard the train and later uses it to convince Octopussy that Kamal Khan (Louis Jourdan) has betrayed her.

The star is intricately constructed featuring a base of moulded resin with applied varnish dressed with a number of faux diamonds with a larger stone to the centre, the prop measures approximately 3.5" wide and remains in very good condition with some colour fade due to age, on screen the prop featured a further piece added to the top comprising of a much larger central stone surrounded by several smaller ones, this was likely made to make the priceless Romanov Star appear even more impressive as it is seen in extreme close up and this prop lacks that later addition.

A rare and highly displayable artefact from one of the most celebrated franchises in cinematic history.