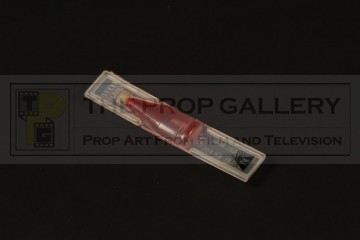 An original prop used in the production of RoboCop 2, the 1990 action sequel directed by Irvin Kershner.

An original vial of Nuke, the highly addictive designer drug distributed by Cain (Tom Noonan) which is plaguing the streets of Detroit. A central plot device of the movie these vials can be seen used prominently by various characters throughout the picture. The vial is constructed from plastic and is actually a container for saline solution which was available at the time of production, this solution being dyed red to act as the Nuke drug in the movie. The vial features a decal containing the Nuke logo to one end in addition to the name of the real life company who produced them with the expiration date September 1990.

The Nuke vial measures approximately 2.5" long and remains in good production used condition with a dried red residue left behind by the long since absent solution, overall fine.

A recognisable and displayable artefact from this classic action franchise.