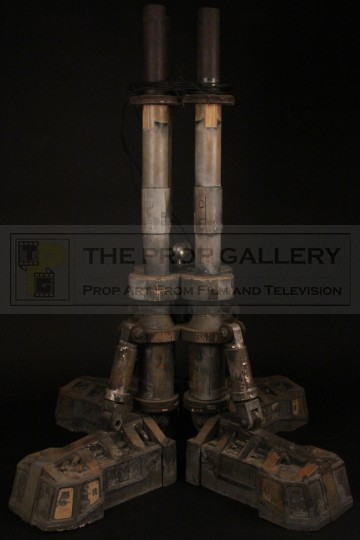 For the scenes where the crew land the Nostromo on the planets surface a massive landing leg was constructed for the live action sequences which was intended to convey the huge scale of the Nostromo craft, this leg measured approximately forty feet high and was shot at Shepperton Studios. The visual effects sequences of the Nostromo landing were filmed later in miniature on stage two at Bray Studios, this required the construction of an enlarged Nostromo front section and a large scale miniature representation of the landing leg used in the live action sequences which was to be filmed in close up as the Nostromo touches down on the surface of the planet.

This is the original Nostromo landing leg miniature which was built in the Bray Studios model workshop and used on screen in this sequence. The central body of the leg was constructed by Brian Eke from various materials including metal scaffolding tubes which have been dressed with wooden and EMA plastic details. The feet were created by John Pakenham who constructed molds and cast the basic shape in fibreglass, plywood was also added to the inside of them to add strength to what is a very heavyweight miniature, they are attached to the prop with hydraulic cylinders which would allow realistic movement in the feet as they came to rest on the planets surface. The miniature also features lights to the centre which could be revolved by a motor and is detailed with various dressing including model kit parts, this was achieved largely by noted model makers Martin Bower and Bill Pearson. The unique miniature was attached to a forklift rig for filming with this and the construction process documented in the various photographs presented here which were taken behind the scenes at Bray Studios during the production.

The large and highly detailed miniature was originally stood much higher with the scaffolding tubes having been cut down since its use in the production, despite this it still stands and impressive 42" high with the feet spanning over 35". The leg remains in generally excellent screen used condition with some age related wear and lacking some minor detail with the central lights untested.

An incredibly rare and imposing artefact from this influential science fiction classic which received the Academy Award for Best Visual Effects.