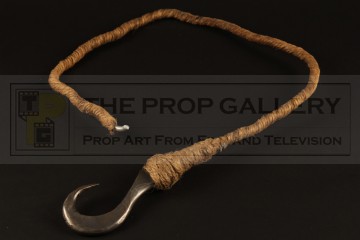 This is an original prop hook used in the sequence where Oogie Boogie captures Santa and Sally attempts to free him. Constructed from thick flexible aluminium rod which is covered in brown twine in order to simulate rope, to the end of the prop is a large hand made hook of metal which is rigged to allow rotation giving the puppeteers more flexibility, it also features a threaded hole which passes though the middle of the hook and would have been used to rig the Santa puppet during filming.

The prop would measure approximately 36" if fully straightened out with the actual hook measuring 3.5" x 2.5", it remains in excellent condition with some remnants of a sticky substance from use on production which was possibly used to attach Sally's hands during filming, overall fine.

A displayable artefact from a memorable sequence of this highly regarded stop motion classic.