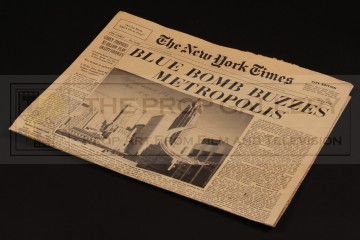 An original newspaper cover created for the production of Superman, the 1978 superhero classic starring Christopher Reeve and Marlon Brando.

This New York Time newspaper was custom made by the production and features the headline 'BLUE BOMB BUZZES METROPOLIS' with a large image below of Superman flying through the city, the interior pages being from a genuine period newspaper dated May 1977. This is an early version of this particular newspaper with the one ultimately appearing on screen being a Metropolis Times, in addition the image is slightly different with this example having hand inscribed lines and notes achieved in pencil, likely by a crew member while the newspaper was being reworked during the production.

An affordable and displayable artefact from the production of this highly regarded superhero classic.