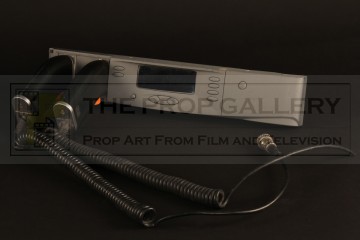 An original prop used during the production of Moon, the acclaimed 2009 science fiction drama directed by Duncan Jones and starring Sam Rockwell.

This panel formed part of the live action interior set created at Shepperton Studios which was used for filming scenes of Sam Bell (Sam Rockwell) in the Rover cockpit with much of the set dressed by the effects team assembled by model maker Bill Pearson. The panel is constructed from found parts which include a painted fascia from an electrical device such as a record player dressed with two speaker mics from a radio or similar, wooden blocks to the back allowed the prop to be fixed on set. This can be seen in the centre of the Rover cockpit and also in a close up as Sam receives a printed reading.

The panel measures approximately 15" wide and remains in excellent production used condition with some paint wear and one of the leads missing the coupling, otherwise fine.

A unique and displayable prop from this already cult science fiction masterpiece.