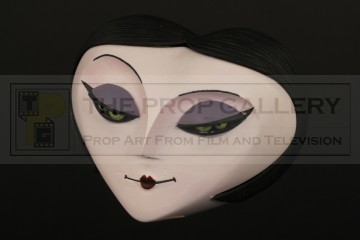 This is an original puppet head for Miss Spider, voiced by Susan Sarandon, which was used to bring the character to life using stop motion animation. Custom fabricated by the production from high quality resin the head features a hand painted detachable face appliance, eyes and eyelids with a metal hole to the bottom used to locate it on the puppet body. The interior of the head features numerous hand inscribed production markings including the date 5/11/95 with the back of the face appliance hand inscribed with the number 29C.