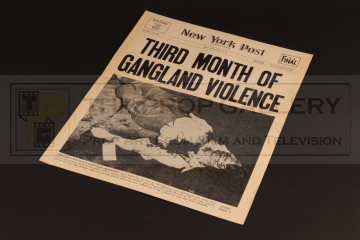 An original prop from the production of The Godfather, the 1972 crime picture starring Marlon Brando and Al Pacino under the direction of Francis Ford Coppola.

This is an original newspaper custom made by the production for the memorable 'going to the mattresses' montage sequence which follows the scene where Michael Corleone (Al Pacino) executes Virgil Sollozzo (Al Lettieri) and Captain McCluskey (Sterling Hayden). This atmospheric sequence featured a number of newspaper covers featuring genuine crime scene photographs used to convey that war was breaking out between the families, these shots were filmed and edited by Francis Ford Coppola's close friend and protege George Lucas who would go on to create the Star Wars franchise with the music composed by Coppola's father who can be seen playing the piano during the sequence.

The New York Post newspaper cover is custom printed on the appropriate paper stock and features the headline 'THIRD MONTH OF GANGLAND VIOLENCE' with a photograph of a genuine crime scene below, it is blank to the interior and verso having only ever intended to be shot from above for use in the montage sequence. The newspaper measures approximately 15" x 12" and remains in excellent vintage condition with only minor age related toning, formally folded and now stored flat, extremely fine.

An extraordinarily rare artefact from this Academy Award winning classic which is widely regarded as one of the greatest pictures in the history of cinema.