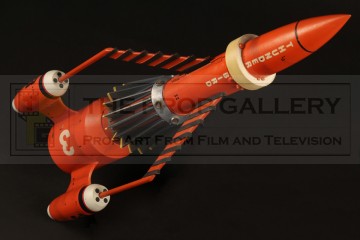 In 1991 the BBC began running repeats of  Gerry Anderson's 1960s television series Thunderbirds bringing the show to another generation of children and cementing its place in history as one of the most popular television shows of all time. This resurgence of interest in the series spawned new merchandise, among this was a series of comics produced by ITC Entertainment/Fleetway Publications.

It was decided that model miniatures were required to be shot for use in the comic publications, with none of the original studio filming miniatures used in the production of the series known to have survived new model needed to be built, the job of faithfully recreating the iconic craft fell to veteran model maker Martin Bower (Alien, Outland) who had previously built the majority of the original filming miniatures on Gerry Anderson's Space: 1999.

This Thunderbird 3 miniature is one of those created by Martin Bower and shot during the photography used on the comic publications. This model stands an impressive 15.5" high and was built in scale with the Thunderbird 5 Martin created for the comics. Constructed from jelutong wood, EMA plastic tubing, perspex and brass painted in the signature colour of Thunderbird 3 with intricate panel line detailing and weathering.

A number of distinguishing features on this model can be conclusively matched to the Thunderbird 3 which appears on the front cover of the comics 75th issue released in September 1994. These features include a small break in the top detailing tape, the black detail within the letter D, paint defects, a small chip off one of the detailing pieces and the weathering to the top of the miniature. The model has had the top of the docking collar repainted white at a later date to make it more faithful to the original studio models with other very minor details added, however, considering the lack of good reference material available to Martin in the early 1990s this remains an incredible representation of Thunderbird 3.

An incredible display spectacle and a faithful recreation of this iconic craft with genuine ties to the series which remains the crowning glory in the career of one of British televisions most influential individuals.