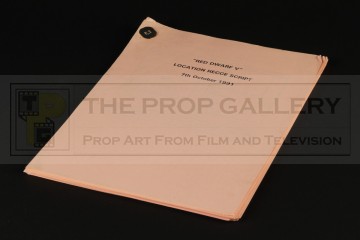 This recce script was used during the production of Series V for the sequences filmed on location for the episodes Back to Reality, The Inquisitor and Terrorform which took place the week beginning Monday 21st October 1991. The script comprises of 51 pink pages in addition to four daily breakdown sheets with the font cover featuring the name of the series and the date of issue, 7th October 1991.

The script remains in excellent condition with only minor edge wear from production use and handling, very fine.