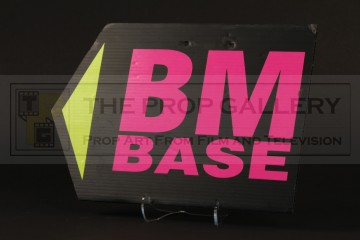 From Torchwood: Miracle Day, the fourth and final series, this is a sign used to direct cast and crew members to the various filming locations. Constructed from twinwall polycarbonate sheet the location sign features the letters 'BM BASE' in applied fluorescent pink lettering, this refers to the initials of UK unit producer Brian Minchin. The sign also features a fluorescent yellow arrow and is double sided to allow use in either direction, the two holes which are present were used wire the sign to various objects, such as railings or fence posts, as required.