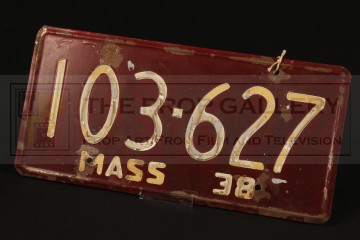 An original licence plate used in the production of The Brink's Job, the 1978 picture directed by William Friedkin.

Prop licence plates such as this can be seen used on various vehicles throughout the movie. Constructed from metal the plate is finished in dark red paint and features the registration number '103-627' in raised white lettering with 'MASS', for the state of Massachusetts. The plate also features a period tag which is stamped 'DINO DE LAURENTIIS CORPORATION' and 'BRINKS' with a hand inscribed catalogue number.

The plate measures approximately 13.5" x 6.5" and remains in good vintage condition with some significant paint wear and surface rusting to the verso.

A displayable artefact from this Academy Award nominated production.