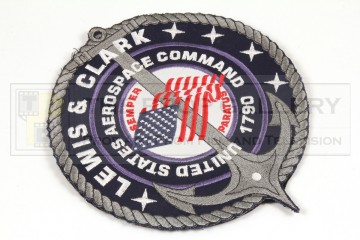 An original costume patch created for the production of the 1997 science fiction horror Event Horizon.

Lewis & Clark patches such as this can be seen on the various gear used by the crew including their jackets and bags. The highly detailed embroidered patch reads 'LEWIS & CLARK, UNITED STATES AEROSPACE COMMAND 1790' with an American flag and motto to the centre.

The patch measures approximately 7" in diameter and remains in near perfect original and unused condition.