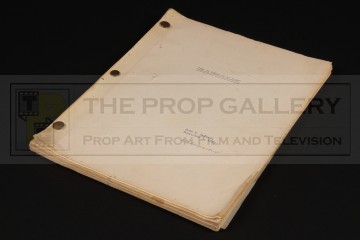 This original production used screenplay dated September 5, 1970 comprises of approximately 80 photocopied pages with a cover page featuring the original title 'THE 24 HOURS OF LE MANS' with credit to John T. Kelley who rewrote the script in France during a production hiatus, Kelley was uncredited on the movie and his contribution to the picture is not widely acknowledged as being significant. The script also features a memo to the front dated 9/17/70 noting that the name of the character Monique has been changed to Lisa with a blank employment agreement to the rear. Throughout the script various pages feature different revision dates, these include 9/10/70, 9/23/70, 9/24/70 and 10/2/70.

This screenplay features various differences to the final cut of the movie, most notably it has Ferrari #6 driver Vito Scalise (Michele Scalera) finishing the race in second position with Michael Delaney (Steve McQueen) behind in third, this was later revised and we ultimately see Porsche record a 1-2 finish.

The screenplay remains in generally good vintage condition with some edge wear and toning consistent with age and use lacking the original outer front cover although the rear cover remains intact, overall fine with expected wear.

An incredibly rare example of original production material from this Steve McQueen classic which will forever remain a cult favourite with racing enthusiasts.