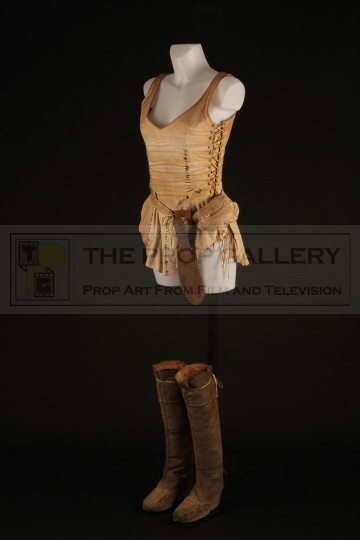 An original costume used in the production of the long running science fiction television series Doctor Who.

This costume is the original worn on screen by Louise Jameson as Leela, the memorable scantily clad companion who appeared alongside Tom Baker in nine serials of the show in 1977 and 1978. This version of costume can be seen worn by Jameson in The Image of the Fendahl, Underworld and The Invasion of Time, it can be screen matched to all three serials and is believed to be the only example ever made by the BBC Wardrobe Department.

The costume consists of a mini dress with matching underwear, arm bands, belt and knee high boots, it is intricately constructed from chamois leather with stitch detail to appear primitively made and is weathered and distressed giving a well used appearance. The hand made boots, belt and pouch are also of leather construction and complemented by a well made reproduction knife and sheath.

The costume remains in generally excellent condition with some wear consistent with production use and heavy makeup staining to the interior. The costume is made available by The Prop Gallery on behalf of actress Louise Jameson and is accompanied by a hand inscribed and signed letter of provenance from her stating that the costume is the only one ever made and the serials in which it was used.

This represents an incredibly rare and instantly recognisable companion costume from this cult science fiction series.