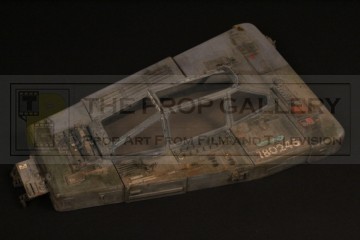 This original Nostromo cockpit window was used in the production of the 1979 science fiction classic Alien directed by Ridley Scott with design from legendary Swiss surrealist H. R. Giger.

During the production of Alien Ron Cobb's initial design of the Nostromo starship was bought to life by an effects team led by Brian Johnson. Working at Bray Studios the model effects crew constructed the model miniatures in various scales to satisfy specific filming requirements. One such miniature was a large scale front section used for scenes of the Nostromo on the planet which was approximately three times as big as the same section on the complete large scale Nostromo filming miniature.

This is the original cockpit window from that enlarged Nostromo front, beautifully hand constructed in perspex and dressed with a number of model kit parts and decals. The prop is meticulously painted and weathered and is a testament to the skills among an incredibly talented model effects team. It was such attention to detail which earned the movie the 1979 Academy Award for Best Visual Effects ahead of some very stiff competition.

This incredibly detailed miniature measures approximately 17" long and 10" at its widest point. It remains in excellent production used condition and was fortunately rescued by a member of the model team before the rest of the large scale front section was destroyed forever when filming wrapped at Bray.

The last four images show the cockpit window at the Bray Studios workshop during the production.

This represents a significant, desirable and displayable model piece from this Academy Award winning masterpiece which is considered among the greatest science fiction movies of all time.