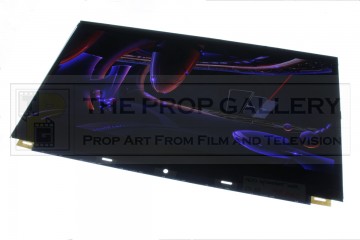 An original animation cell used in the production of Tron, the 1982 science fiction adventure picture directed by Steven Lisberger and produced by Walt Disney.

This original large format Kodalith animation cell was used in the production of the notable deleted love scene between Tron (Bruce Boxleitner) and Yori (Cindy Morgan) which takes place in her apartment. This was deleted late in post production despite containing some of the most extensive and complicated backlight compositing in the entire film, it appears as an extra on the 20th anniversary DVD release.

This animation cell comprises of two positive transparencies measuring approximately 20" x 12.5" with the top layer being the colourful apartment element and the base layer being a black and white contrast mask, these are protected by taped front and rear covers of plastic with the front featuring a tape sticker which is hand inscribed 'HERO w/CONTRAST MASK, L.S (Love Scene) 10' and 'TRANS' in red pen.

The piece remains in excellent production used condition with only minor wear to the protective plastic covers, extremely fine.

A rare artefact from this pioneering classic of the science fiction genre.