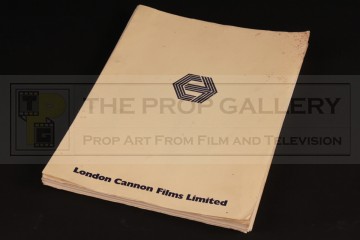 This original production used second draft script is dated October 28, 1984 and comprises of 108 pages bound between front and rear covers of creme card with the front featuring the London Cannon Films logo and to the interior cover the working title of the film 'KING SOLOMON'S MINES and The Cave of Death'.

The script remains in very good vintage condition exhibiting some edge wear and toning with some minor staining to the front cover, otherwise fine.