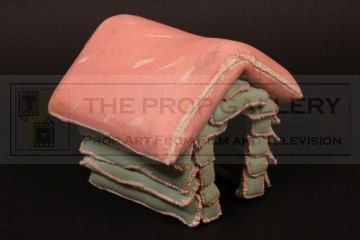 This original kennel miniature was screen used in the hit children's television series Tom and Vicky voiced by Richard Attenborough and Rik Mayall and directed by Martin Pullen.

This is the kennel used throughout the series by Kevin the dog. This intricately detailed and beautifully constructed prop is made from wood dressed with material which has been hand painted and hand stitched to create the signature Tom and Vicky look, the kennel walls are pinned together and the roof lifts off allowing access to the interior for filming requirements.