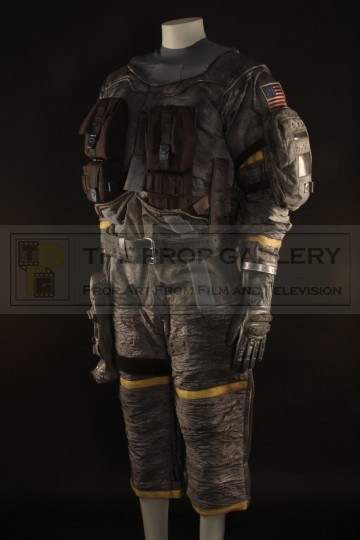 An original spacesuit used in the production of the 1997 science fiction horror Event Horizon.

This complex spacesuit was visioned by noted designer John Mollo of Star Wars fame and constructed for the movie by special effects company FBFX. Highly detailed in every aspect the two piece suit features zip fastenings at the waist and heavy padding to the interior with custom made metal cuffs, this particular suit was created for the character Justin and used by Steen Young who was the stunt double for Jack Noseworthy, it features the JUSTIN name patch to the right arm in addition to the Lewis and Clark search and rescue patch and a USA flag patch to the upper left arm. This in accompanied by an original belt which is a modified weightlifting belt and production altered motorcycle gloves, both hand inscribed 'JUSTIN' and several utility pouches for the upper arm, leg and two which were used on the front pack.

The spacesuit remains in excellent condition exhibiting some minor wear from production use, generally fine.

A fine example of principal character wardrobe from this regarded science fiction horror.