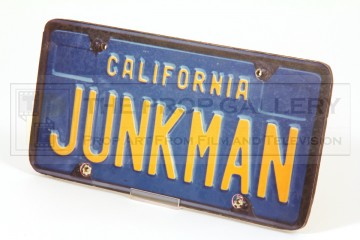 An original prop used in the production of The Junkman, the 1982 picture produced by H.B. Halicki and the successor to his 1974 classic Gone in 60 Seconds.

This original production used licence plate carries the registration 'JUNKMAN' and can be seen on various cars in the movie including the Pontiac Firebird. Interestingly this plate is constructed from hardboard with the plate printed on paper and applied to the wood, this copied from a genuine three-dimensional plate and this method used to create multiples which is unsurprising given the independent and low budget nature of the production.

The licence plate measures approximately 13" x 6.5" and remains in excellent production used condition with some wear to the bottom holes consistent with being attached to a vehicle, generally fine.

An extremely rare artefact from this cult classic which requires no introduction.