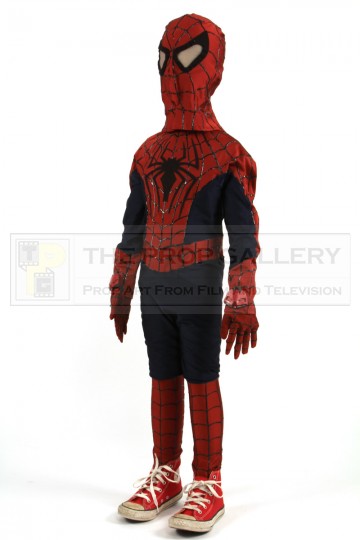 An original costume used in the production of The Amazing Spider-Man 2, the 2014 superhero sequel starring Andrew Garfield in the title role.

This children's Spider-Man costume was custom made by the production and worn by Jorge Vega as Jorge in the sequence near the end of the movie, it was also featured in promotional material around the time of the movies release with numerous images of Vega and Garfield circulated in the media. The four piece costume comprise of a red and blue spandex bodysuit featuring a large spider to the chest with web lines and plastic shooters to the cuffs, a mask and gloves of similar construction and a pair of Converse trainers. Accompanied by two original wardrobe tags featuring the actors name and scene numbers with a list of the costume components to the verso.

The costume remains in excellent production used condition throughout with only minor wear, very fine.

An instantly recognisable wardrobe artefact from this popular superhero franchise.