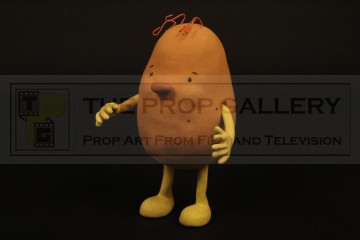 This is an original stop motion puppet for the character of Tater Spudinski, the main body of the puppet is constructed from soft foam with hands and feet of silicone rubber which contain an internal metal armature making them fully poseable allowing the character to be bought to life through the use of stop motion animation. The puppet also features wire hair which again can be posed, eye and eyebrow details and a large nose, the bottom of the feet contain strong magnets which would firmly anchor Spudinski on set during filming.

The puppet stands approximately 7" high and remains in excellent production used condition throughout with his arms and legs remaining fully poseable, the bottom of his right foot has a tear to the silicone revealing the magnet, otherwise he remains in near perfect original condition.

A vibrant and highly displayable artefact from this well received children's television series.