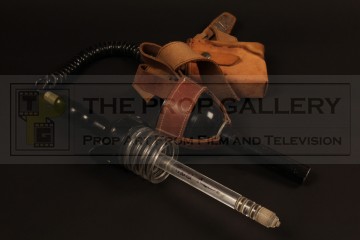 An original Liberator gun used in the production of the BBC science fiction television series Blake's 7.

This is an original Liberator gun used by Sally Knyvette as Jenna in various episodes of series one and two and later by Jan Chappell as Cally in series three of the show. Constructed by the BBC Visual Effects Department from a design by Ian Scoones the Liberator gun is built from turned perspex with a plastic handle and features a internal bulb to light the barrel, this is powered through a jack plug and flex which connects to a hand made battery pack. The weapon is complete with its original holster, and battery pack holder which hang on a belt of brown leather with both the rear of the holder and belt being hand inscribed 'SALLY' in pen. The barrel has been hand signed by Gareth Thomas who portrayed Blake.

The weapon itself measures approximately 16" in length and remains in generally excellent screen used condition with some minor wear, the belt and holster likewise with some staining to the battery pack holder, overall in fine vintage condition and arguably the finest example of an original and complete Liberator gun in existence today.